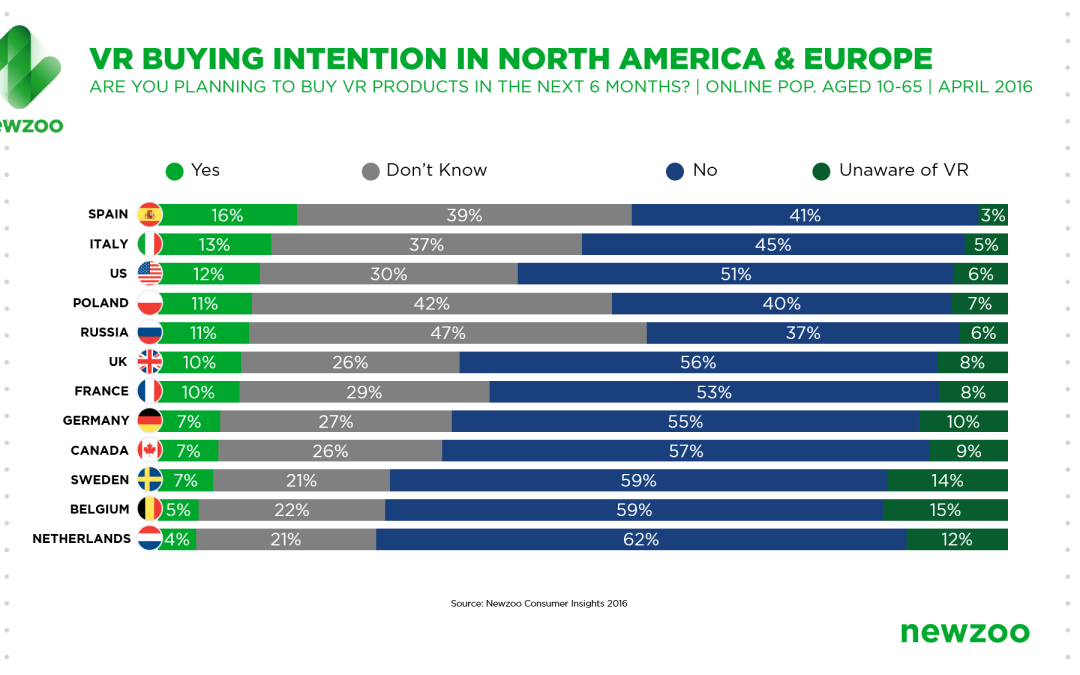 An online study conducted by Newzoo that covered 16 countries in North America and Europe, suggests that 11% of people, aged between 10 and 65, are looking to buy into virtual reality within the next 6 months, that 8% are not yet aware of VR, that Spain is the most aware of VR and that Canada is willing to spend the most on it.

The study also shows a correlation between esports engagement and VR buying intention: 63% of all VR buyers are into esports. Still, no VR manufacturer has yet sponsored esports events, teams, channels or leagues. With this new research in sight, most probably this will change.

At Newzoo, we have been relatively silent when it comes to VR. This has to do with our expectation that the lion’s share of VR revenues will be generated by hardware sales, spectator content, and live viewing formats. Game software revenues from VR will remain marginal for the near future and be absorbed into current PC, TV/console and mobile game revenues. We will leave guestimates on the future size of the total VR market in revenues to the experts in hardware and (online) retail sales. We are specialists in game revenues and gamer behavior. Hence our effort is to research and report on VR from a consumer perspective because ultimately, in the long term, VR and AR will change how consumers communicate and interact with content.

Interestingly, 7% of this group, roughly 4.4 million people, are non-gamers. This proves the technology’s appeal and reach is extending beyond gaming. The highest interest in VR can be found among game enthusiasts, but this does not imply that VR gaming will be the most popular use of VR. It is important as a VR manufacturer not only to examine which gamers have the interest to buy, but also who has the budget to match your offering. 18% of the Western gamers that intend to buy VR have spent more than $600 on gaming hardware in the past 12 months. In Canada only 7% of consumers intend to buy VR. However, the Canadian gamer has a relatively high hardware budget, with 28% of those who intend to buy having spent more than $600 on hardware in the past 12 months. In that respect, the more expensive VR models like the Oculus Rift and the HTC Vive are more likely to match the budget of a Canadian gamer than a Spanish gamer. Though interest in VR is highest in Spain (16%), the money they invest in gaming hardware is much lower. It is likely that the cheaper VR offerings will perform better there. Although VR industry it is still in its incipient stage, most of the manufacturers will appreciate this kind of researches. Nothing is certain though with the disruptive evolution of the emerging VR industry. This study may be irrelevant 6 months from now, but for the time being, newzoo provided us with the gamers market segment perspective upon VR.