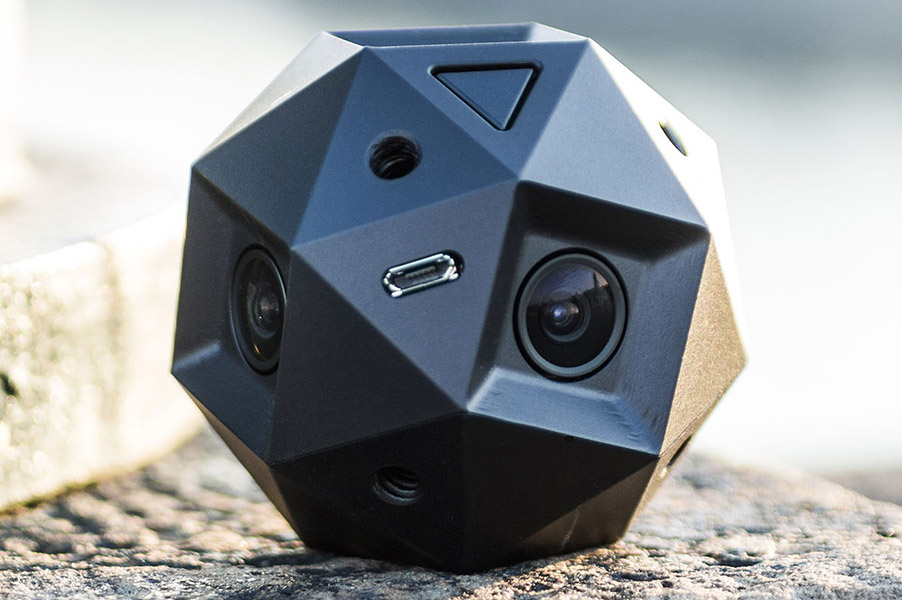 Sphericam is a full spherical professional 360º video camera that records in 4K.
You can film everything around you and play it back in amazing resolution on your PC, tablet, or VR headset.

4K – High Resolution
Jaw-Dropping 4K resolution that leaves nothing to the imagination.

Awesome, at any rate
up to 60FPS for ultra smooth action, even in challenging environments

Industrial global shutter sensor
We have chosen a very specific type of sensor which you will never find in another camera of this size or price. Our 1/3” global shutter sensor is extremely highly rated in peak quantum efficiency, sensitivity, and low noise. The GLOBAL SHUTTER allows perfect capture of every pixel instantaneously, with zero focal plane distortion, no rolling shutter effect, and zero “jello” effects. No other 360º camera on the market is able to provide this type of performance.

Synchronization
Sphericam is a single integrated camera. Its six sensors are completely synchronized in every way. The six sensors fire with 50 microseconds of each other (that’s five HUNDREDTHS of one millisecond!). Exposure and white balance are also synchronized.

Frame Rate
Up to 60 FPS raw/unstitched, up to 30FPS stitched. People want two things: 60FPS and to see some results immediately. We offer both of these things. We even offer stitched panoramic video in a RAW format for maximum fidelity capture. The realtime stitched panoramic video can be captured at up to 30FPS, in either raw or compressed formats.

Bit Rate
Sphericam records large files. Whether you’re recording in RAW or with some compression, the videos are ready for editing, and have a good latitude for color grading in post production. Sphericam records at up to 150 megabytes per second (1.2 gigabits per second) to the internal microSD card module or at up to 100MB/s (800 megabit) through the USB port.

File formats
Sphericam records in a proprietary format in the camera which is then converted to either Cinema DNG or motion JPEG using our bundled software. Additionally we provide the ability to convert these files to MP4/h.264 on your PC or Mac.

Live Streaming
It is possible to record either stitched or not-stitched video, through the USB cable, to a local PC or Mac, at a bit rate of up to 100MB/sec (100 megabytes per second, which is 800 megabits per second). This video stream can then be processed in real time into a compressed h.264 video stream which can be broadcast to the web.

GPS
Sphericam contains a GPS module which lets you encode the real-world position of every frame of your video. If you’re interested in a camera for google streetview-type applications, this can be very useful.

IMU/Compass/Accelerometer
Using the internal motion sensor, Sphericam knows which way is up and which way is down. It’s therefore possible to have a “straight” video every time. Currently the orientation of the camera is set before you press the “record” button, and then the orientation metadata is saved in realtime as the video is recorded. Afterwards, on your PC/Mac, you can reprocess the video (whether it has been stitched already or not) to apply additional stabilization on every frame.

Storage
There are 6 microSD cards inside Sphericam, housed in a single removable module. With a current limit of 768GB, you have a maximum recording time of around 85 minutes of 12-bit, nearly lossless RAW goodness. You can, of course, record much longer if recording in a more compressed quality.

External power
If you want to use Sphericam for many hours in a row, that’s possible! Our USB-C port allows a much higher current than old USB 2, which means you can charge the battery and operate the camera simultaneously. If you use a computer such as the latest Macbook which also has USB-C, it is possible to keep the camera charged, and to stream recorded video off the camera, onto the computer’s internal disk, all at once.

Size
The optical diameter of sphericam is 65mm. That means, the lenses that are opposite one another are 65mm apart. This is 3mm smaller than a tennis ball. The aluminum housing of the camera has a diameter of 87mm which is a bit bigger than a baseball.

Housing
This camera is tough, having been milled from a single solid piece of aircraft aluminum. We haven’t run it over with a car yet, and we don’t advise you to try it either – but we can say that there is definitely no more solidly constructed camera that we have ever seen.

Weight
At under 500 grams, Sphericam is ready for flight. Mount it on your drone for the most amazing VR experiences.

Mounting options
With its 8 mounting holes on every corner, with a standard female 1/4-20 threaded hole, you are totally unlimited in terms of mounting options. In terms of appropriate accessories, it is essential to have a good monopod/pole, tabletop tripod, and perhaps a few other options such as a pole clamp, magic arm, and suction cup mount. We will be offering accessories very soon.