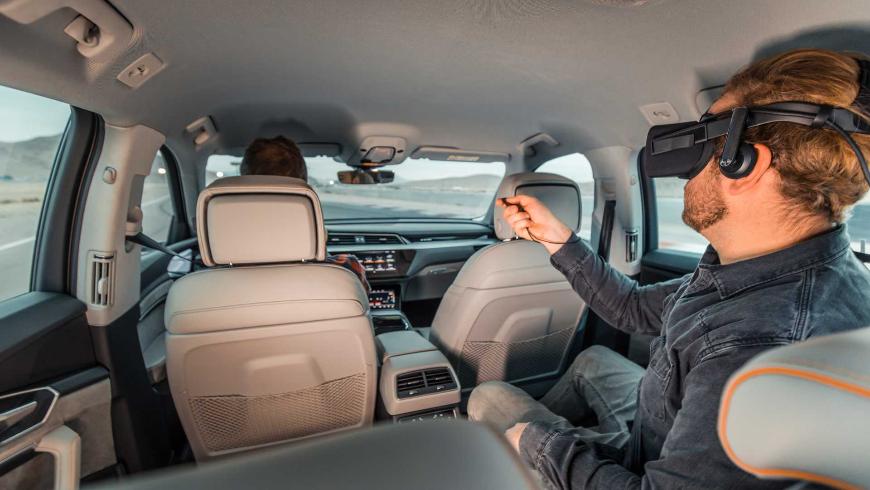 Have you ever had those long, tiring and boring road trips? Because I surely did spent  up to even 10 hours sitting in the back seat of the car, not being able to do anything else but sleeping and occasionally admiring the beautiful landscapes. Fortunately, the great and cool news is that Holoride technology is here to change that by immersing people in an adventurous VR experience in their own car (but warning: only as a backseat passenger!) .

Holoride is a German start-up whose roots are the German automaker Audi, founded  last year by entrepreneur Nils Wollny, VR specialist Marcus Kühne and engineer Daniel Profendiner(former or current employees of Audi). This project’s vision is to ”combine XR with vehicle movement and navigation data, creating hyper-immersive experiences.” and to also implement its technology in other cars like Mercedes, Ford and Chrysler Pacifica minivan. Holoride was first announced at the 2019 Consumer Electronics Show (CES), held in Las Vegas, as a technology that brings virtual reality to cars.

How does this in-car VR platform work?

“If the car turns a tight corner, the player curves around an opposing spaceship in virtual reality. If the Audi E-Tron accelerates, the ship in the experience does the same.”. This is just a glimpse of how Holoride works, according to what Audi said in a press release.

In other words, the backseat passengers can play VR games while wearing a VR headset. Pretty basic, right? But what makes this experience so intriguing and unique is the combination of the following three elements: Audi’s new E-tron all-electric SUV equipped with Oculus Rift headsets and a modern and high-performance PC.

Maybe you’re wondering now why the word ”spaceship” is present in what Audi said in the press-release previously mentioned. Well, the VR game that is currently available on the Holoride platform is  “Marvel’s Avengers: Rocket’s Rescue Run”,  developed by Disney Games and Interactive Experiences. The special thing about this experience is that the VR content is synchronized with the car’s movements. Thereby, if the car turns right, the spaceship from the game will also do the same movement.

How can the game recognize the vehicle’s dynamics?

The game reacts in accordance with the vehicle’s movements thanks to the Holoride technology that picks up the car’s data (throttle position, brake application, navigation and steering angle). Therefore, every acceleration, every stomp of the breaks and every move will be perfectly mirrored in the VR game. This cutting-edge innovation (matching the car’s movements with the VR experience) is said to be also an in-car nausea reducer, as the co-founder of Holoride, Nils Wollny, explained: “With this technology, we don‘t ‘cure’ motion sickness but we do reduce it significantly. Some people consuming conventional media in cars get motion sickness and this technology brings that number down. Our research showed three times as many people did not experience motion sickness.”.

Holoride is such a futuristic and cool concept yet it is already implemented. The technology used is ready to immerse anyone willing to make his time spent on a roadway a productive and exciting one.