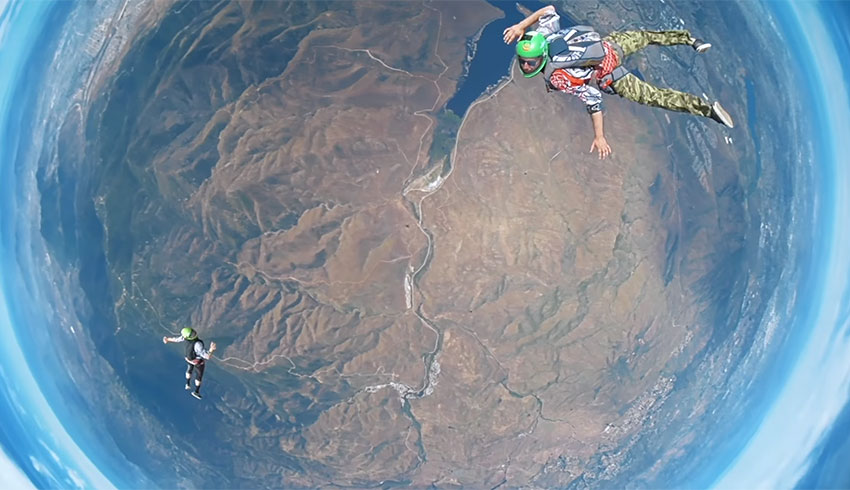 Skydiving is both a dangerous activity and one of the most intense, life altering moments you’ll ever have the pleasure to experience. Tunnel Vision, a brand new experience launched by Virgin Experience Days at Twinwoods Adventure, Bedford, combines a VR headset with indoor skydiving so this activity is 100% safe. Founded by Cody Russell and Tristan Hampson as part of the tech incubator EvoNexus, the immersive new experience creates an intense level of realism by using both VR and actual indoor wind tunnels to accurately simulate the physical sensations of free falling.

A custom-made headset provides high definition 4k, 360-degree video via a private Tunnel Vision app managed and updated directly by the company remotely. Based on the video provided it appears as though the Samsung Gear VR is the primary component of the set-up. Each video displayed on the headset is perfectly synced to the physical jump with the 360 visuals beginning as soon as you enter the wind tunnel. As the flight ends, the software shuts down, revealing the external environment as they exit.

“Tunnel Vision recreates the skydiving environment of jumping out of an airplane with breathtaking views while in the safety of a wind tunnel by using virtual reality. Virtual reality allows people of all ages and risk adversities the chance to experience what it is like to jump out of an airplane while under a coach’s’ supervision in a wind tunnel, making it a safe environment that can be enjoyed year round. When a customer goes to a local wind tunnel they will now have the option to upgrade to the Tunnel Vision™ experience. The customer will then wear a specially designed full-faced helmet with an integrated virtual reality headset and can chose to virtually skydive anywhere in the world!”

Like many before them, the Tunnel Vision team had a few unique speed bumps to overcome before opening the experience to the public. One of the biggest concerns was making sure the VR headset was secured firmly enough to withstand the intense wind speeds within the wind tunnel. The answer to this riddle is a patent pending head-mounted display that utilizes a ratchet system to safely and comfortably secure the VR headset to a larger helmet.

Another concern was the safety of participants while they are flying “blind” in the tunnel. To combat this potential hazard, all jumpers are accompanied by an instructor who remains attached at all times in order to assist with spatial awareness as well as tunnel entrances and exits. I’m also willing to bet they’ll be having some fun at your expense while you’re flying blind. After all, who could resist rapidly spinning an unsuspecting jumper and then watching their reaction as they make a sudden 360 move while in VR? I couldn’t, but maybe I’m just evil.

Tunnel Vision is currently supported by only two locations. The first at Airborne San Diego in California and the second at Twinwoods Adventure in the UK. However according to Russell, “We are targeting the European market first, with plans to expand into 8 tunnels within the Next 6-12 months.”

So how good is the experience exactly? Why not listen to what the British Army’s Parachute Regiment display team, The Red Devils, had to say after trying it out themselves with Virgin Experience Days: