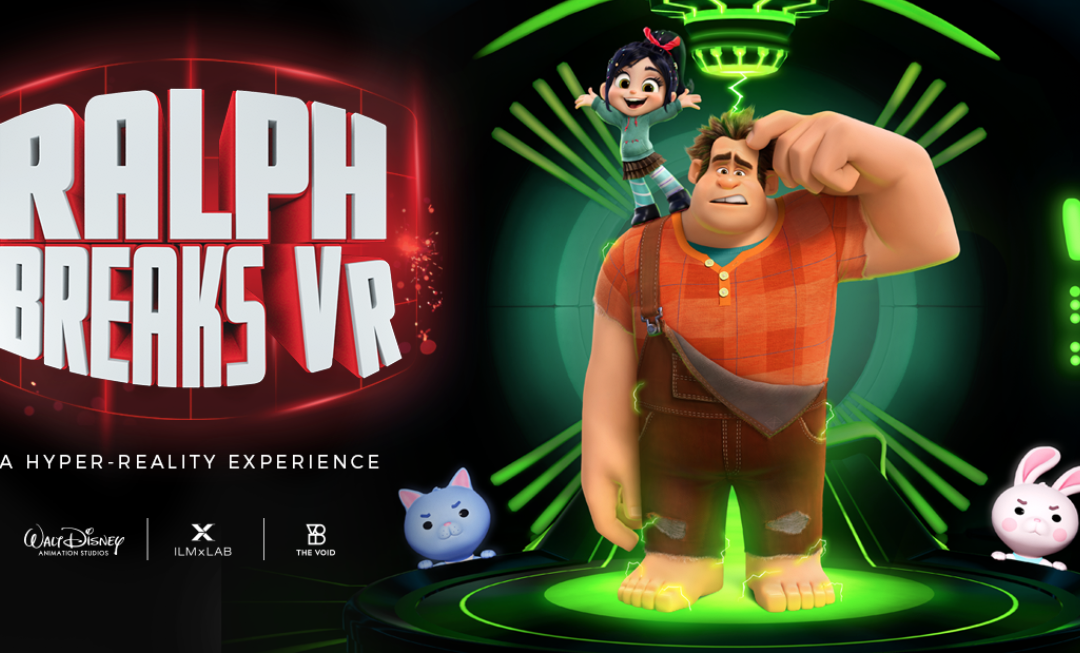 ”Shoot retro alien spaceships, squash pixel bugs, and fend off hordes of bunnies and kitties in the Pancake Milkshake Diner while you team up with Ralph and Vanellope in a race against time to see who can rack up the highest score! It’s all fun and games until an evil security system shows up and threatens to take you and your new buddies offline…permanently.”

What you have read is not more than just a glimpse of the amazing and immersive project ”Ralph Breaks VR”, whom Disney’s ILMxLab (a division of Lucasfilm) created together with The VOID (entertainment company of mixed reality attractions). This VR video-game will provide a hyper-reality experience ready to make you step inside the movie whose premiere will take place on November 21, ”Ralph breaks the internet”.

What is ”Ralph Breaks VR” really about?

Disney officially described the video-game in the following way « In teams of 4, guests will break into the internet with Wreck-It Ralph and Vanellope von Schweetz disguised as characters from the film called “Netizens” to play the newest, coolest video game ever. Ralph Breaks VR introduces two brand new locations, Dunderdome and Pancake Milkshake Diner, and a new antagonist, B.E.V. voiced by writer Pamela Ribon, which stands for “Built to Eradicate Viruses.” ».

How does this video game offer a fully immersive experience?

Once that people are ready to immerse themselves in this journey with Ralph, they must be equipped with VR headsets, vasts and least but not last, fun.

Curtis Hickman, Chief Creative Officer and Co-Founder of The VOID, said “What we’ve created together with ILMxLAB is an astounding adventure that allows people to experience a unique extension of Wreck-It Ralph’s detailed characters, environments and stories. With this new experience we are able to truly showcase the capabilities of The VOID, allowing guests to once more step beyond reality.”

Where will it be launched?

Unfortunately, the video-game will be launched only in a few locations in the US and Canada:

Ralph breaks VR” is thereby a 25 minutes awesome VR experience (the first out of the upcoming five Disney and Marvel VR projects) that even if not released yet, it continually receives great feedback from numerous people and organizations. Through this project, virtual reality has shown us just one more time how diverse its uses are and how great are people reacting to its presence in cinematography and gaming.

Vicki Dobbs Beck, Executive in Charge at ILMxLAB,  beautifully said: ”There is nothing more magical than stepping inside a rich animate world – especially one filled with color, life, humor and delightful characters as is the case with Ralph Breaks the Internet. Ralph Breaks VR is an experience that brings a smile to your face and the desire to have another go around with friends and family.”.