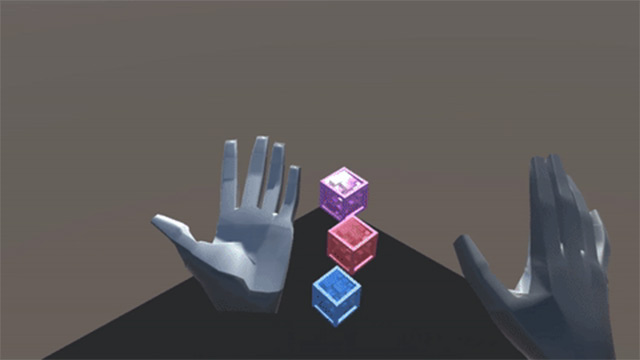 Leap Motion (not to be confused with Magic Leap) have just made a big step towards functional hand tracking. Last year, they released an early access beta of the Leap Motion Interaction Engine, a layer that exists between the Unity game engine and real-world hand physics. In the past few days they released a major upgrade to this tool kit. It contains an update to the engine’s fundamental physics functionality and makes it easy to create the physical user experiences that work best in VR.

Here are some of the new features and functions in the Interaction Engine:

Contact, Grasp, Hover
Contact: what happens when a user passes their hand through an object?
Grasping: what does it mean to naturally grab and release a virtual object?
Hover: how can I be sure that the object that I’m contacting is what I actually want to interact with?

Widgets and Wearable Interfaces
You now have the ability to create an interface that is worn on the hand, but expands into freestanding palettes as the user grabs an element off the hand and places it in the world.

Graphic Renderer
A general-purpose tool that can curve an entire user interface with ease, and render it all in a single draw call. Designed to unlock new levels of performance in the upcoming generation of mobile and all-in-one headsets, it tightly pairs with the Interaction Engine to bring curved spaces to VR interaction.

Head over to Leap Motion blog to read more about this exciting release and maybe even start building with it.