Go back in time with Pixel Ripped 1989 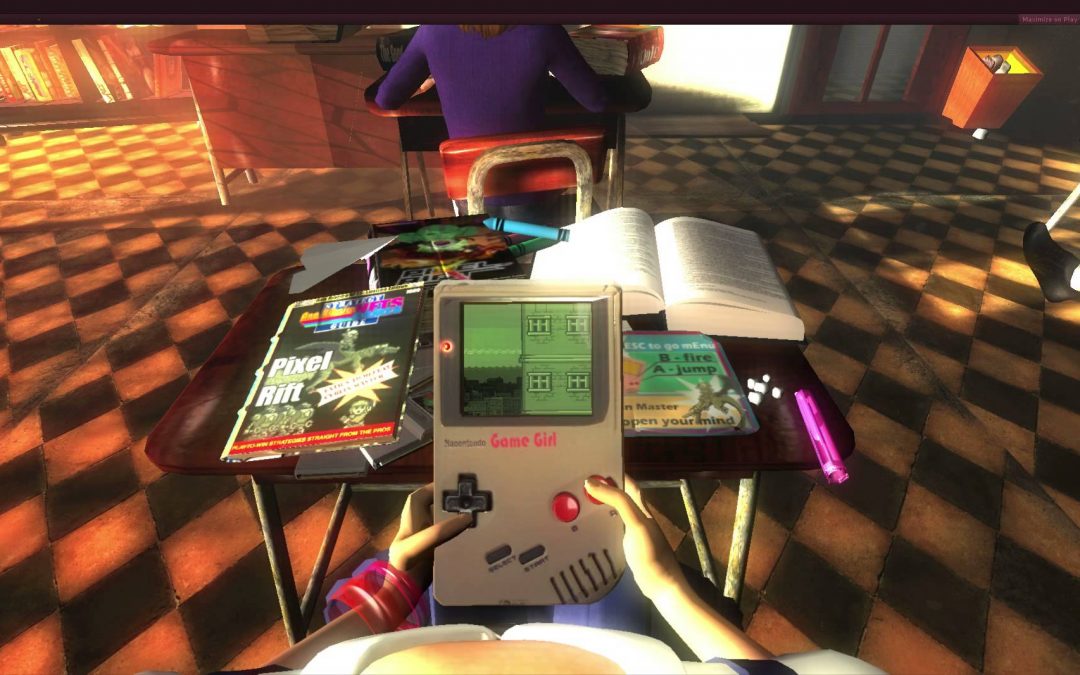 Many of the people reading this don’t know how the technology and  the ways of entertainment were like in the past, but the VR game Pixel Ripped 1989 is here to take you back in time and also, to bring back memories and  immerse those who caught the ’80s in a retro atmosphere.

What is the game really about?

The studio itself gives us the best answer: “Pixel Ripped 1989 is a wacky multi-dimensional homage to the early days of gaming. The player embarks on a journey into the screen of a classic videogame and beyond. Set in the era of portable 8-bit consoles, this game-within-a-game follows the adventures of Dot, an in-game character who sees her world torn apart by the Cyblin Lord, a villain able to break through the video game screen and invade the real world. In the game, the player inhabits Nicola, a second-grade student who must help Dot save both realities from this menace by facing challenges in the retrogaming 2D world, all while distracting the cranky teacher and escaping from the furious headmaster in her own 3D world.”

When will it be released?

Well, this question comes with a happy and long awaited answer, because the good news is that although its launching has been delayed for two years (yes, you read correctly, two years!) and many people began to doubt this project, the game received some help and on the 31st of July it was marked its releasing, after four years of fine-tuning it. This whole situation made me to remember some wise words of the French philosopher Jean–Jacques Rousseau: “Patience is bitter, but its fruit is sweet.”.

Is now  the ”fruit” that ”sweet”,  after such a long waiting?

Or better said, was the wait really worth it?  Well, for sure it was, because even before its releasing, the game (whom Steam and Oculus Rift versions sell it at $19.99  and PlayStation Store  at $24.99) has been a nominee and also a  winner of numerous awards like the Proto Awards for Most Innovative VR Game. Pretty impressive, right?

Moreover, a few months ago, the team of the Brazilian VR studio ARVORE(VR/AR company based in São Paulo, Brazil ) who helped the lead developer of Pixel Ripped 1989, Ana Ribeiro, to finish this project, said:

“This Spring, we were excited to let Pixel Ripped’s 1989’s incredibly patient fans know that we had expected the game to be available in May. While the response to the game during GDC, PAX East, and VRLA has been overwhelmingly positive, our team has decided to take a few more weeks to polish all versions of the game for a smooth release across Steam, Oculus Home, and PlayStation VR simultaneously. While we will no longer be releasing the game in May, we are excited to help ensure that ‘Pixel Ripped 1989’ is ready to be the best retro-inspired gaming adventure that the VR world has ever seen when it arrives this Summer!”.

All these being said, Pixel Ripped 1989 is the 2018 VR game ready to immerse  you in the world of the ’80s. And as a stronger proof that this creation is so unique and it worths the purchasing, the VR critic and personality PSVR Frank reviewed the game as “a solid 10 out 10 making it my first 100% frank approved VR title. They took something extremely relatable, retro, and close to our gamer hearts, and turned it all the way up to 11.”.