The first Angry Birds VR game: The Isle of Pigs 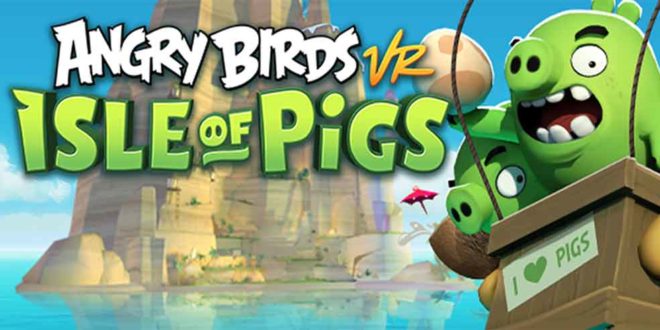 Name  a person who owns a smartphone and has never played Angry Birds. Since its release from 2009, this simple yet adorable game in which you launch fluffy birds in order to destroy the evil green pigs’ houses has become one of those MUST play games. Now, after almost a decade, Resolution Games and Rovio Entertainment (ROVIO)  announced on February 7 the official release of Angry Birds‘ VR game, The Isle of Pigs.

Before adventuring in The isle of Pigs, what are Resolution Games and Rovio?

Resolution Games is a studio based in Stockholm, Sweden, that aims to create amazing  virtual reality and augumented reality immersive experiences for everyone. The studio is known for creating numerous VR popular games like Bait!, Narrows, Solitaire Jester and Wonderglade.

Regarding their newest product, Resolution Game’s CEO, Tommy Palm, said: “The beauty of VR is that it allows players to enter and play in a 3D, fictional game universe, something people have fantasized about for decades. And, VR inherently lends itself well to strong characters, which is why the Angry Birds brand is such a great fit with its humor and strong gameplay. It has been incredibly fun for us to bring that to life, opening the door so players can immerse themselves in that world.”.

Rovio Entertainment Oyj is a video game developer company headquarted in Espoo, Finland. They are best known for launching Angry Birds 10 years ago. Sami Ronkainen, who is a Creative Director at Rovio, affirmed: “As a company we’re deeply interested in the future of gaming and in fact, investigating new tech and platforms remains one of our core strategic pillars. We’re delighted to be supporting the VR industry’s growth and introducing the beloved Angry Birds slingshot gameplay to new platforms.”

How is the VR experience once immersed in The Isle of Pigs?

With the VR headset put on, players are teleported on a remote island, a place whom the green pigs consider it a vacay destination. There, the birds wave to you and are waiting to be catapulted by you. Once fully immersed, you will move, duck down and be very dynamic in order to find hidden pigs and other surprises and secrets.

All the things said above will be present in over 50 levels that were designed to make users think out the box while having fun killing the evil piggies.

What about the price and the devices that make this experience an unforgettable one?

On the Oculus Store and Viveport, Angry Birds VR: Isle of Pigs costs $14.99. What is pricier, on the other hand, are the devices that make the experience thoroughly immersive, which are currently Oculus Rift and  HTC Vive.

The Isle of Pigs is the cool product brought to virtual reality thanks to the partnership between Resolution Games and Rovio Entertainment.  Finally, I will leave  Tommy Palm‘s words to reflect this project’s main aim  “From what we are seeing in the industry there have never been more players interested in VR. Sure, there’s still much more room for improvement, but platform and hardware companies are evolving like crazy and we’re getting closer and closer to consumer-accessibility and cost. Our hope is that bringing an iconic brand like Angry Birds to VR will only help draw in more VR players.”