AR and VR are set to take off 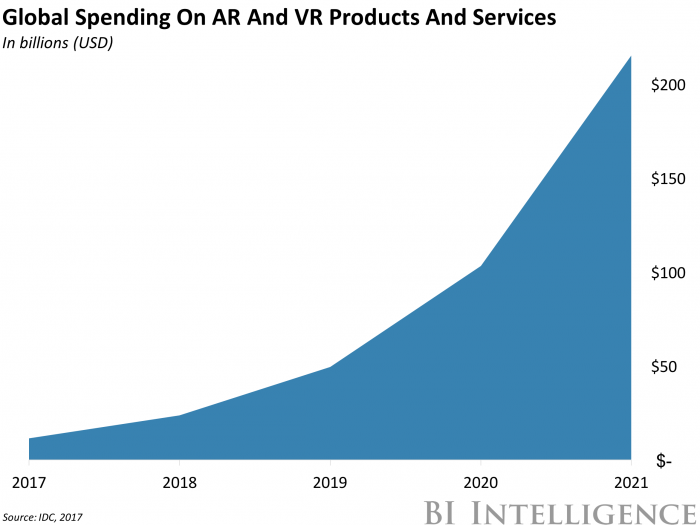 Augmented reality (AR) and virtual reality (VR) are on the precipice of rapid expansion as global revenues for the AR/VR market are projected to increase by at least 100% over the next four years, according to a recent report from IDC.

Moreover, total spending on AR/VR products and services is expected to grow at an annualized rate of 113% to reach $215 billion in 2021, up from $11 billion in 2017. The rapid growth is in part due to the significant investments and innovations led by tech giants such as Apple, Google, and Facebook, including tools, platforms, and services, as they seek to lead the adoption of the next big computing platform.

The US will likely be the dominant region in terms of total spending in AR/VR with an estimated $3 billion in 2017. And although the US is expected to pioneer initial growth in the space, the regions that will experience the fastest growth through the five-year period are Canada, Central and Eastern Europe, Western Europe, and the US at annualized growth rates of 145%, 133%, 121%, and 120%, respectively.

Increasing demand for the nascent technology could have rippling effects across numerous industries. In particular, there are three segments projected to catalyze AR and VR investment and adoption.

Although retail, consumer, and manufacturing segments are expected to heat up first, the study finds that other segments including government, transportation, health care, and education will soon follow suit. This adoption across industries is expected to speed up as the underlying tech continues to evolve, which will give developers and companies the ability to better craft immersive experiences for the enterprise and consumers alike.

Jessica Smith, research analyst for BI Intelligence, has compiled a detailed report on virtual reality that: